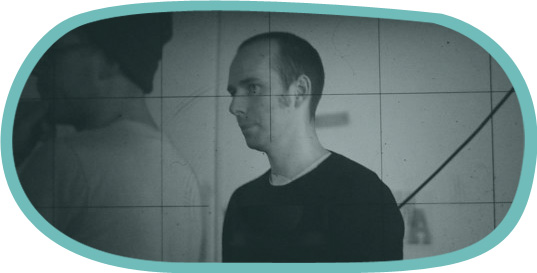 Neil McGuire is a designer and the founder of After the News. He discussed the difference between "I" and "we" in business and some projects in which small can be beautiful.

Me vs We – For Neil, small doesn't always mean alone. "When I talk about After The News, I often talk about we, because I rarely do anything completely on my own." Neil has many collaborators, including developers. Most designers don't work alone. Designers, and other creative small business owners, work in networks that resemble hypertext, in nodal networks. Neil also works at Glasgow School of Art – a small institution that is related to other universities, but not a huge one compared to the scale of his work. He says it works best when it behaves like a network not a hierarchy.

On Doing What You Love – Neil quipped that there would not be any useful business advice in this talk – that he sees his business as an elaborate way of funding a book buying habit. "I've never wanted to be rich, and that's been my greatest success."

On Smallness – Smallness as a political thing. It's relative, but it's an interesting thing to think about. What are the affordances of smallness? "I think it's important to rethink what being serious in work means. The great benefit for me is that I don't need to be serious – that doesn't mean flippant. As soon as stuff becomes more important, people get more serious, and it's important to break that. An affordance of being small is that you can collaborate and work responsively to situations in which you find yourself."

On Small as Experimental – Neil used the example of MOOCS – massive online open courses. They're interesting but they highlight that things that are experimental have more value in this space. He highlights Parallel School – a 'TOOC' or 'tiny' project begun in Paris by students who wanted a parallel experience outside their classes. Short-circuited institutional resistance to collaboration. Everyone was learning and teaching at the same time, which also creates a strong social element

Fashion and Cultures – Neil moved on to speak about some detail about design. As a designer, he is interested in typography, in forms. The serifs on typefaces are a hangover from angled scribes. Working in collaboration with small businesses allows 1-1 collaboration and build up trust.

Digital – The technology we have affords certain things. If you want to know what's happening in digital technology, Neil joked, go to the loos in Stereo (a restaurant and bar in Glasgow) and read the graffiti (see his slides for details). He also cited a book he found which states that, "Designers born after 1980 have a totally different way of seeing visual culture" and compared what this might mean for studios and digital design. He advocates "Business as unusual" – a great takeaway for designers and other small businesses alike.

You can download and enjoy Neil's presentation slides here.

Neil McGuire from Small is Beautiful on Vimeo.

Here's more from Neil McGuire through our Twitter live feed:

Neil Maguire @offfbrand is up next to discuss graphic design, typography and more. #smallisb — Small is Beautiful (@SmallisB) June 5, 2014

Neil kicking off by talking about saying "We" versus saying "Me". For him it's often "We" – him & the collaborators he works with. #smallisb

Neil's tweets about the GSoA fire was widespread, but Twitter's algorithm said "people really like this". Algorithms not so smart! #smallisb — Small is Beautiful (@SmallisB) June 5, 2014

. @offfbrand is interested in talking about design as a verb, not a noun. It's a process, not a thing or an end-point. #smallisb

"An affordance of being small is that you can collaborate & work responsively to situations." @offfbrand #smallisb — Small is Beautiful (@SmallisB) June 5, 2014

Neil says it's interesting to work in collaboration with small businesses allows 1-1 collaboration and build up trust. #smallisb — Small is Beautiful (@SmallisB) June 5, 2014

"If you want to go what's going on with digital technology, I advise going to the toilets in @StereoGlasgow." – @offfbrand #smallisb