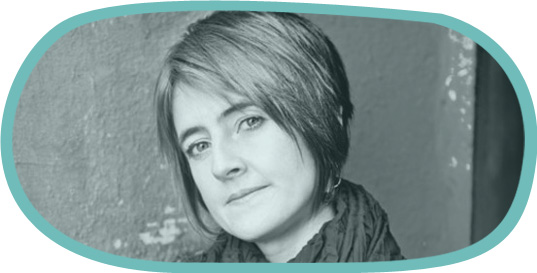 Musician Karine Polwart gave a stunning and lyrical keynote at Small is Beautiful – one which is difficult to summarise.

Nevertheless, here are some key points.

On Scale & Self-Governance – Karine opened with a story about the bird kingdom: Who will be the King? The story raises issues around scale, and of how we govern ourselves. She drew upon the Scottish independence debate to demonstrate that the notion of what small means and what large means is at play on many levels in our lives. What kind of power we want to cultivate in our work?

On Microbusiness – There's a lot that this can open up around running a microbusiness. In our business enterprises, it's important to think about what it means to have power, and to apply that power. "I struggle to see myself as a micro-business, but what if our enterprises were our own beautiful cosmoses? Can we imagine what kind of universes they are, what they're made of, and how we're amplifying them out to others? What do they say about us and the people with whom we want to share them?" Karine asked. "I find that easier to articulate than a business strategy – but it's the very same thing. "

On Leaning In – Ivor Cutler was once asked how he should be amplified, and he signed that the audience should lean in not back. Karine describes this as her style of power, "I'm looking for lean-in not lean-back". It's a question we can ask ourselves about how we communicate. How can we amplify ourselves like Ivor Cutler? We want people to sit forward and listen to what we have to offer – not to sit back.

On Storytelling – There are issues around the stories we tell about how difficult our work is and how difficult we make it for ourselves. She draws the example of musicians who always wish to have the best gear, about seeking credibility through technology, venue access, and "breaking through". Is the story we tell about the difficulty of our work vital, or is it getting in the way?

On Intimacy – As a closing remark, Karine said: "I think Small Is Beautiful, but I don't think small enterprises operate in a bubble… The one thing that gives me hope comes back to the issue of meaningfulness and intimacy. One of the strengths that I have is that I keep my operations deliberately small… with people in small physical spaces, these are the things that people remember, and the things that fuel me to continue to write and make music. That's all."

Karine Polwart from Small is Beautiful on Vimeo.

Here's more from Karine Polwart through our Twitter live feed!

Plenty impressed with listening to your story @IAMKP - the story, a metaphor for the "power of small" #smallisb pic.twitter.com/QfrnUBU0lj

.@IAMKP would like the blank screen to be representative of her choice & determination to listen and learn and improve. #smallisb — Small is Beautiful (@SmallisB) June 5, 2014

How can we amplify ourselves (like Ivor Cutler)? Wanting people to sit forward and listen, not to sit back. #smallisb — Small is Beautiful (@SmallisB) June 5, 2014

Karine's lovely thoughts & ideas are tricky to fit in a tweet! Some quotes on our live blog: http://t.co/rA6HwMUwBV #smallisb

Meaningfulness & intimacy, staying small, is what sustains @IAMKP. Many more of us, too, we're sure! #smallisb

"I think small is beautiful. But I don't think small businesses operate in a bubble." – @IAMKP #smallisb — Small is Beautiful (@SmallisB) June 5, 2014

"My work is fragile, deals with grief and loss, and I have very personal exchanges with my audience about what the songs mean to them…" 1/2

"… & that's what makes me feel OK about doing the business side of it: knowing that impact on people." – @IAMKP #smallisb — Small is Beautiful (@SmallisB) June 5, 2014

every time I see and hear @IAMKP. I'm minded of scale and power of the wren, and how the power of her stories brings me to tears. #smallisb

"There are issues around the stories we tell about how difficult our work is and how difficult we make it for ourselves." – @IAMKP #smallisb — Small is Beautiful (@SmallisB) June 5, 2014

One thought on “Karine Polwart, Musician on Amplifying Your Art”